Do you want to write forever? Start a food journal. 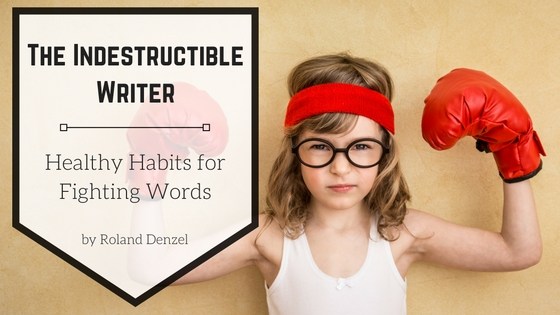 You’re a writer, and I’ll assume that you write because it’s your passion, not just a job. For me, it’s my art. My joy. My way to get my message out to the world.

The thought of losing my ability to write terrifies me. So much so, I changed my lifestyle and lost over 100 pounds. Like any artist, I need to take care of my tools — my hands, head, neck, back, and brain — to continue to pursue my passion.

There are a lot of writers out there who intend to do just that, yet they don’t actually have a plan, much less act on it.

I’m the health guy here, so I’ll just say it. If you don’t take control of your health, one day it’s going to affect your ability to write.

I know of one famous author who had his tailbone removed so he could sit down to write again. I know another who misses a month of writing at a time because she’s in bed, waiting for her back to feel better.

Wrist pain, migraines, sciatica, even plantar fasciitis are commonly keeping authors from writing. Yes, foot pain can affect your word count. Pain is very distracting, and pain medication can be counterproductive to writing.

I don’t like to preach, but I do want my message to sink in. Your health as a writer is in your own hands. And yes, the pun is definitely intended.

The good news is that you can halt the progression of, or reverse most conditions that commonly afflict writers. Better yet, you might prevent them from appearing in the first place.

Is it easy? Not always, but the individual steps aren’t all that hard, either.

The best news is that each step, no matter how small or simple, adds up, quickly.

Most of the afflictions I listed above are symptoms of diet, lack of nutrition, or lack of movement. Notice I didn’t say lack of exercise, I said lack of movement. I didn’t say crash diet or detox, either, and I didn’t blame gluten, carbs, or red meat. The only one-size-fits-all solution is to prescribe taking that first step. Starting.

Begin your journey, then worry about your next steps after that.

The journey of a thousand miles begins with a single step. ― Lao Tzu

In “Episode One” I gave you some good first steps for a writer’s fitness plan: Swap out some of your seated time for standing time, eat more protein, and walk more. Pretty basic steps. So basic, you might even have looked at them, rolled your eyes, and moved on because they don’t seem like enough.

In “Episode Two” I told you about Turkey Head; that head forward posture where your head reaches toward the computer screen while the rest of the body stays behind. Turkey Head can lead to migraines, bad backs and necks, and even conditions like spinal stenosis. Ultimately, it means days or weeks without writing; unintended breaks that could be avoided with a few minutes of mindfulness each day.

I had a client (let’s call him Dave) who came to me to lose weight. I asked him to write down everything he ate for the next few days. He got too busy to meet, but he kept writing down his food. By the time we met again, Dave had lost six pounds. Dave claimed to have done nothing, but keeping a food journal brought awareness to his choices, and he subconsciously cut calories and lost weight. Doing “nothing.”

I want you to write down your food, just like Dave. 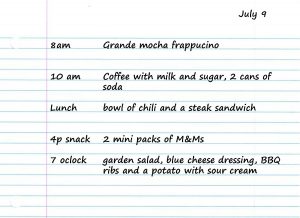 You don’t need to get all crazy with the details at this point. No weighing or measuring necessary, just write down what you eat, meals, snacks, treats, desserts. All of it. Drinks, too, especially those mochas.

You can write in a journal, a composition book, a clipboard, a word processor, a memo on your phone, or even something like OneNote or Evernote. Want to know what Dave used? Starbucks napkins. Seriously.

When I asked Dave to see his food log for the first time, he pulled out a handful of napkins, each scrawled with lists of what he’d eaten that day. I don’t normally recommend napkins, but if that’s what it takes, I’m good with it. It doesn’t matter how you do it, but that you do it.

You won’t have to log your food forever. Just for a while. Start with three days and see how it affects your eating behavior. You might be surprised.

It’s the awareness that we’re looking for. A pause in mindless eating is a big deal. An awareness of what, when, where, how often, and how much we eat can be even bigger.

I’ll be back next month, and if you want to be an indestructible writer, so will you!

Will you log your food for just three days?

Try it and see how you feel, then let me know what changes you’ve noticed!